I think I lost count of the number of patients we saw today and it wasn’t the busiest day we’ve had. It had more to do with the type of patients we had today and I mean that in a very good way. It was the type of patients we saw and what we had to offer them that was so important. And that doesn’t always mean that we have a cure, but we often have answers so they will not have to continue searching which may mean being seen at numerous institutions and still not finding what they are looking for. We may be limited in our ability to order diagnostic tests – an MRI is a 12 hour bus ride away and far out of the reach financially for most Tanzanians – but we have the skills to make those diagnoses which we can help and those that we can’t. It may not always be possible to put a name to something, but if it matters as to what treatment we have to offer we will make every effort to do so.

This morning was very significant for me in that I received word regarding some major funding that will keep our neurology program and partnership with Penn here at FAME quite solid for a quite a few years. I will share more on this matter in the coming months, but leave it to say that I was quite ecstatic over the news this morning.

Shortly after seeing our first patient today, a gentleman walked into our office asking whether we could see his daughter who had been diagnosed with a brain tumor and had undergone surgery. We told him we’d be happy to evaluate her and offer our suggestions if he would bring her later in the day. I wasn’t involved in the evaluation as I was seeing our pediatric neuromuscular patients with Thu, but Ali, Lindsay and Danielle proceeded to review the daughter’s history. After only two months of unilateral symptoms she was found to have an enhancing mass in the right hemisphere and eventually referred to India for biopsy and surgery. The mass was determined to be a grade IV astrocytoma, otherwise known as a glioblastoma multiforme, and has a horrible prognosis. The parents had actually been told this when she was discharged, but had not shared this with their 18-year-old daughter who was very bright and intact cognitively. As Ali will be going into palliative care, this was the perfect case for her and she explained to the parents that it was very important to share with their daughter that she was dying and that she was probably already aware of it as most patients are without being told. The parents said that they would consider Ali’s recommendation, so in the meantime Ali spent time speaking with the patient about her current symptoms and beginning to manage those. Meanwhile, Ali is planning to do a home palliative care visit next week along with Brad (an NP here and education specialist who has an interest in palliative care as well) and who will be following the patient after we leave.

The family was incredibly comfortable with Ali’s explanations and ultimately the burden of their daughter’s illness will be partially lifted from their shoulders. Like any parent, they are trying to protect their child from the evil of her illness, but children are smart, especially an 18-year-old, who they know is on the internet and most likely researching her symptoms so is almost undoubtedly already aware that she is dying. Their visit with Ali was so impactful and exactly what was necessary, but which is so often neglected. I said goodbye to her parents when they were leaving with their daughter having been loaded into their car and told them that they had seen the very best person possible for them to have seen. Though her life expectancy is probably only six to nine months, it will now hopefully be spent with quality time with her family and management of her symptoms to make her as comfortable as possible and without the burden of trying to continue to extend her life which is not possible.

We also saw a one-year-old patient back who was having trouble holding its head up and the mom had brought him in last week to see us. Ali had taken a short video that we sent along with the history to Doug Smith at CHOP who also checked with our pediatric neuromuscular colleagues there. We were concerned about a muscular disorder and they agreed based on the history of the video that is what the child most likely had. We examined the mother to see if there was any possibility of this being a congenital problem and there was some suggestion of that in her exam, but alas neither category of disorders would have a treatment so we had to recommend a wait and watch strategy along with follow up for the time being. 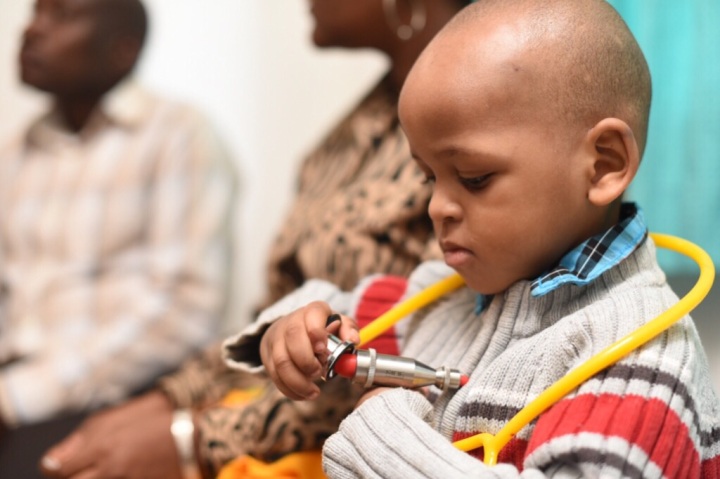 The rest of the day continued at a busy pace, but with teamwork everyone was seen by either Danielle or myself along with the residents and we even had an EEG or two interspersed along with the evaluations. A new volunteer coming from England but having worked in Tanzania previously was coming with his wife today and needed my room in Joyce’s house so it was off to be Frank and Susan’s houseguest for the rest of the week until a room opens up for me in one of the volunteer houses. We enjoyed dinner together on the veranda and some wonderful crepes made by Pauline in traditional French tradition without measuring cups or spoons. They were delicious. Off to bed and another day tomorrow.