The Strength in What Remains….

I am taking today’s blog title from an amazing book by Tracy Kidder about a young medical student who survives the genocide in Burundi to find himself in the United States. It’s a true story and so as not to give away too much I will suggest that you find a copy and read it. The inspiration for today’s blog, though, is another amazing story of strength and hope here in Northern Tanzania.

Our day today began with a lecture by Thu on the neurological examination for all the doctors and clinical officers here at FAME. I think it went over incredibly well as she had everyone practicing on each other in the room to see exactly what it is that we do as neurologists. The exam is a very powerful tool for us and in conjunction with the detailed history that we take, it is a means for us to hone in on a localization of the problem at hand. As Thu expressed it, it’s all very simple. We take a history, make a hypothesis, and then test our hypothesis with our examination and make whatever corrections we have to along the way to come up with a theory.

Our very first patient of the day was a young woman who had recently been diagnosed with epilepsy and was on a medication that she was not taking on a regular basis. Thus, she was continuing to have seizures. After taking our history and examining her, though, we had some concern for the type of epilepsy she had and felt that an EEG would help to sort it out as the medication one uses is often dictated by the type of underlying epilepsy the patient has. We brought her over to the ER which is serving as our makeshift EEG lab for the time being and the epilepsy team hooked her up for a study. She was patient No. 1 for this groundbreaking technology at FAME. Amazingly, she had exactly the type of epilepsy that IS NOT well treated by the medication she was taking and she was converted over to a medication more effective for her condition. In fact, the medication she was on can sometimes worsen seizures for patients with her condition. This could certainly make the difference between well controlled and poorly controlled epilepsy which would make all the difference in the world for this young woman.

We saw an early tremor dominant Parkinson’s patient who we had not seen before – Thu was incredibly excited since she will be going into a movement disorder fellowship next year and this was right up her alley. We saw another stroke patient who I first saw in 2011 and continues to follow with us on a regular basis even though he has continued to do well. The hardest thing here is too get patients to remain on their long term medications, though, as it is just something they aren’t used to doing. We had wanted him to remain on aspirin but he had unfortunately stopped it several months ago after his prescription ran out. It is not due to non-compliance, or lack of adherence as they now refer to it, but rather that it’s just something that isn’t build into their culture at the present time. We’ll continue to work on that. 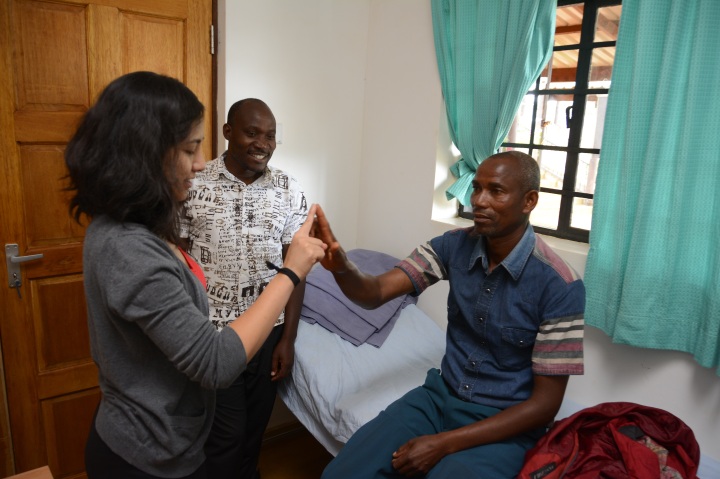 A gentleman came to see us today with right orbital swelling for six months and limited movements of the right eye. After taking our entire history it turned out that they had been to KCMC several months ago and were told that he needed additional testing, butt hadn’t been able to afford it. After our exam we came to the same conclusion as the only deficit was his eye and the differential included infectious etiologies, systemic disease or a mass lesion. Without a CT scan of the brain and orbits, which is very likely what they had recommended at KCMC, we really couldn’t proceed to treat him as we didn’t know what we were treating. They couldn’t afford the CT scan and so other than some basic labs, we had very little to offer him for treatment.

We saw another young child with epilepsy brought in by his mother who clearly had some cognitive delay, though subtle, and was on a very low dose of medication. We decided to have him undergo an EEG (Patient No. 2) that ended up not demonstrating any abnormalities, but was helpful in continuing him on the same medication he had been taking and which also seemed to be helping. It’s amazing how smoothly things run when you have the right equipment and a great EEG tech. 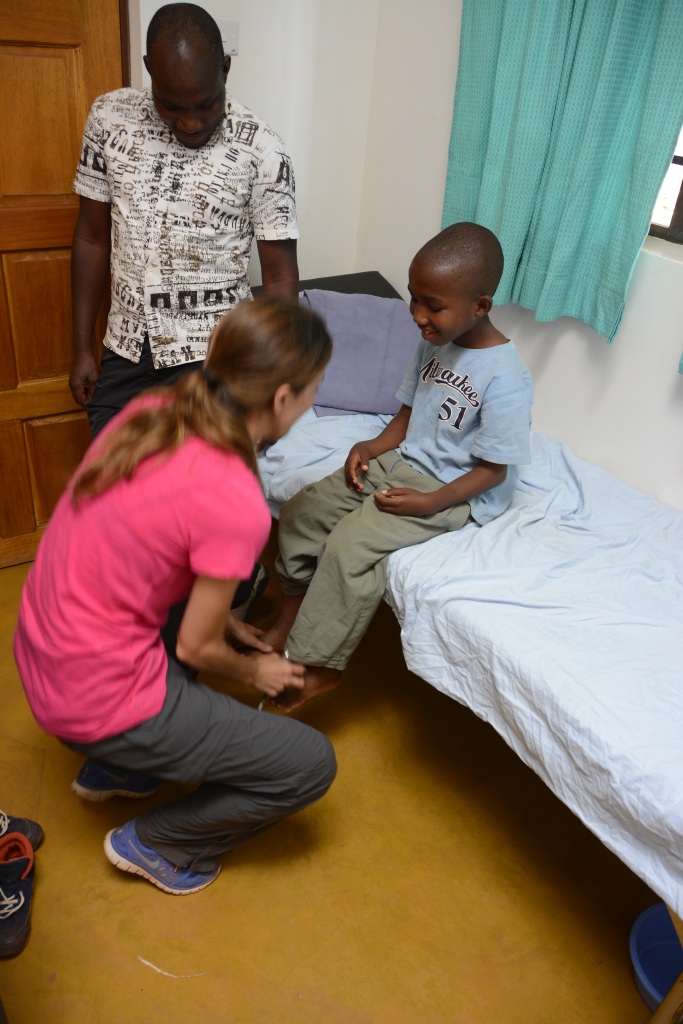 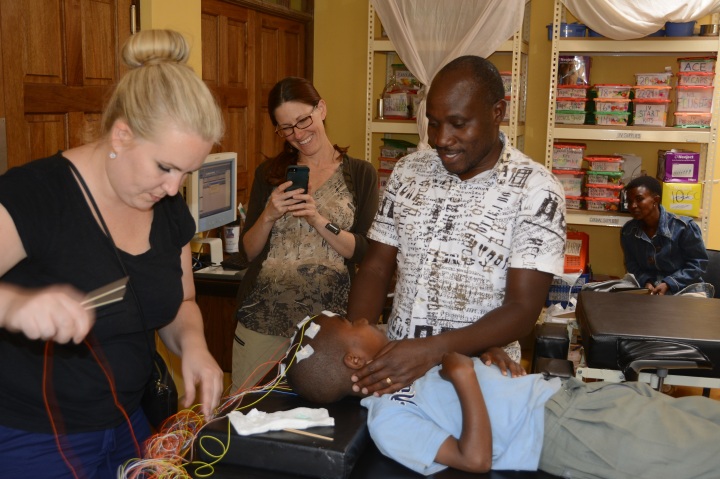 Cara hooking up electrodes with Isaac and Danielle looking on 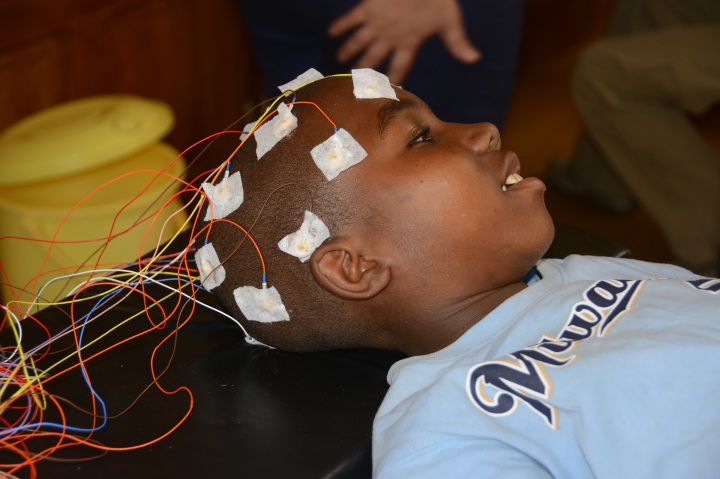 A very compliant EEG patient No. 2 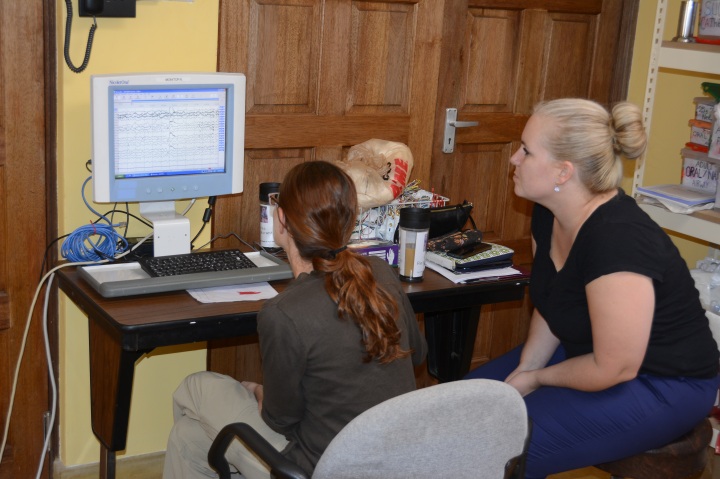 Danielle and Cara reviewing the EEG

So now for the story that inspired the title for today. Fatina was brought to FAME today by her friend and eldest son. She is 47-years-old and the single mother of five children and the primary caregiver for her elderly mother. One year ago, during the night and for no apparent reason, people came into her home and threw acid onto her face. Those responsible have never been caught and there was no clear motive to suggest why it may have happened in the first place. She spent two days in the local dispensary in Barazani (about three hours from FAME) before they realized that she needed more extensive care, and was then transferred to KCMC where she only spent three days for them to apply antibiotics, bandage her and send her home. When she arrived home she found that many of her possessions there had been taken by other villagers. The acid has disfigured her face to such a degree that she has lost both of her eyes and is now blind and all that remains of her nose are two small holes for nostrils.

Despite this horrendous injury and disfigurement, she has persevered and has a remarkable attitude. When asked about any sad thoughts, she does admit to some concerns as to how she will continue to care for her children and her elderly mother, but says that she has accepted what has happened to her and is ready to move on. Her only complaint to us was a minor headache. She was an incredibly lovely woman and when she spoke it was quite easy to forget her disfigurement or the ordeal that she had been through. At the end of our visit, she asked if she could have a photo of her with Thu and myself. I think all of us wondered if we would have that amount of strength had we been put through a similar situation. And, almost to add insult to injury, we found today that she also has diabetes as her blood sugar was extremely elevated and that this will also need to be dealt with. As I walked beside her to the lab for her blood work, I could feel the strength and livelihood emanating from this woman who made me realize that in the depth of our struggle for survival, there are always those unlikely individuals who have demonstrated an even superior strength to have risen from further depths and will always give us eternal hope that we may do the same. It is these unlikely encounters that remind of us of our internal strengths. Thank you, Fatina!