We awakened bright and early today in preparation for our safari to Tarangire. We’re packing lunches (Tanzanian peanut butter and fruit spread, granola bars) for the trip and thankfully the askari have fired up the kuni boilers (wood fired hot water heaters that work amazingly well….as long as their fired up before we need to shower). The safari car is picking us up at 6 am so I’m up at 5:15 am to shower and get my camera equipment together.

Danielle has decided to go on a hike today with two of her Tanzanian friends to the elephant caves up on the crater rim. She had a great time, but I don’t have all the details or the photos just yet. More later on her trip.

Our safari vehicle was filled with me, Dr. Doug, Kelly (a women’s health NP helping set up a program here), Ke (pronounced “Kay” and an MD/PhD student at Yale who is working with FAME on their website and other systems), Luigi (an Italian internist who has been here for a year and is staying on), and his wife, Cindy, who is a lawyer with the Dutch military, a language specialist working on her 12th or 13th language – Chinese!- and is also an amazing photography with more camera equipment than you can imagine). We started our trek to Tarangire, about 1-1/2 hours away and known for it’s elephants and birds (that’s to make Megan jealous, but it is true) and made it to the gate just after 8 am.

As billed we saw lots and lots of elephants. There are huge families that move from the hills down to the river as it’s the dry season right now and this daily trip is a necessity for them. There are many, many little ones which is great to see as it means the herds are healthy and sustainable. 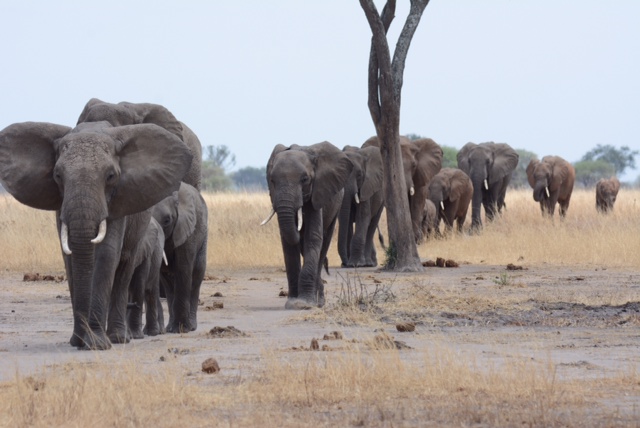 En route to the river on a dry day 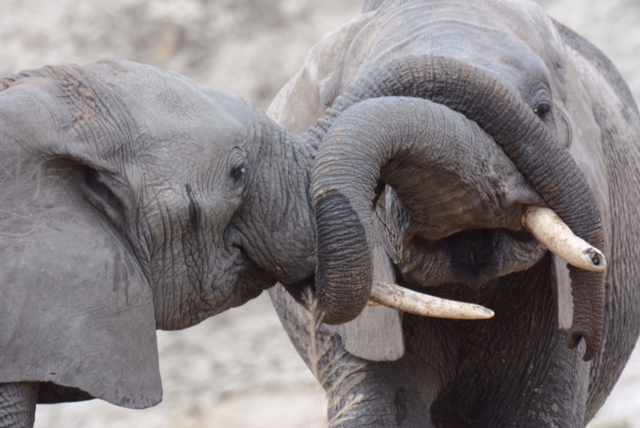 Doug hadn’t yet seen a wild leopard or cheetah yet so those were among our top priorities. We got to see a beautiful leopard sitting in a baobab tree and though far away was quite clear through our camera lenses and binoculars. The leopard has to be the perfect combination of strength, speed and stealth so they are a perfect killing machine and though they will steer clear of lions for reasons of survival, they still have it over the other cats for these reasons.

We ran across three (!) cheetahs sitting in the shade under a tree who were eventually disturbed by our presence and sat up for photos. We had seen the two cheetahs hunting in the Serengeti the other day and I mentioned that it’s unusual to see more than one adult together unless they are of the same sex. They are traditionally solitary animals but are so much more effective when hunting together as they can bring down bigger prey. We didn’t get to see these three hunt in the hot mid day sun though I’m sure it would have been simply amazing.

A trio of cheetah – a rare site

Tarangire National Park is based on the river system there while Lake Manyara has developed around the lake and the tropical forest. The Serengeti’s strength is in its vast and wide open plains. During the dry season the river is where life exists in the park.

Socializing at the river

We drove along the river for a long ways and didn’t see a whole ton more as far as cats are concerned, but did see two lions laying a good distance away. At least we knew they were there.  On the way back to the main gate we were virtually swarmed by the infamous tsetse fly and I think I took the brunt of it as I wasn’t reacting to them. I have a huge welt on my forearm and one on my neck, but they seem to have benefited from some oral steroids and a steroid cream thankfully. Oh, and a little citrizine helped reduce the itching as well.

After arriving home, Danielle and I went back up to Gibb’s to visit Leonard as we won’t see him before we leave since he’ll be going on safari again in a few days. We were able to spend some time with him last night since he was there with his tour group as well and that was great. We got home late and had grilled cheese sandwiches (a staple back home and a luxury here) and sliced tomatoes before bedtime.

We have our first real mobile clinic to Kambi ya Simba tomorrow and I have things to prepare in the morning so will have to get up a bit early.