Today we were scheduled to go to the Rift Valley Children’s Village and small adjacent village of Oldeani. Fame runs a clinic there twice a month, but this was the first time we had done a neurology mobile clinic side by side. We packed up all of our medicines and supplies and drove separately from for the 45 minute drive through beautiful countryside to reach the Children’s Village. We were met by India Howell and quickly saw the large group of patients to be seen by us, not to mention the patients there for the regular clinic. There were 20+ patients for us to see and they were all very appropriate neurology patients which means they take longer than the regular patients the other side was seeing. The photo I’ve included is just our group of neurology patients and not the general medicine patients. Not just deworming and giving antibiotics, but taking seizure histories and the such is quite a bit more time consuming. 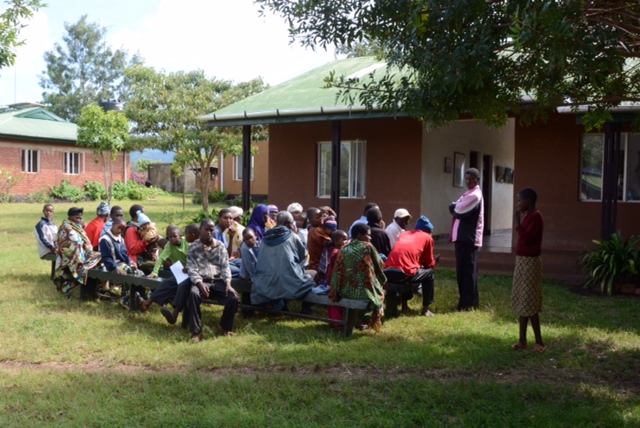 Waiting to be seen at Rift Valley Children’s Village

After seeing several patients, though, we were quickly called out of our room for a young man who had collapsed out front. Luckily it was a patient we had seen yesterday at FAME and who we had asked to come back and see us today which he had done I guess in a sense. He was having continuous non-convulsive seizures and was unresponsive. We wanted to give him some IM Valium which took a bit longer to get organized then we wished, but eventually got taken care of. You can see in one of the photos Megan attending to the young boy with his mom and a nurse to give his IM injection. Several Mamas stood around him holding their skirts in a way so as to give him some privacy considering the crowd of patients we had. And as we couldn’t convince anyone to watch him for us to make sure he didn’t stop breathing, we simply put him in a chair in our room so we could keep an eye on him and continued seeing patients with him in the chair. His mom came in and out and he basically kept seizing for another 4+ hours even with another dose of Valium. We had no way of putting in an IV.

Later in the afternoon it was readily apparent that the kid was not waking up so we made the decision to bring he and his mother back to FAME to get an IV in him. We carried him to the car and put him in the front seat with Megan and got everything loaded. We were unable to see probably nine additional patients which was unfortunate, but we’ll have them come to FAME and see them next Friday. As we drove out of the gate of the village to find Tobias’ mother and were waiting near their home suddenly he amazingly just woke up and looked at Megan. His mother hoped in and we decided to bring them back to FAME regardless. He chatted with Megan the whole way back to town and played with the toy giraffe she uses to examine children. On the way back and almost to the tarmac, the Land Cruiser started smoking a little and we had to stop to check things out. Turns out we had lost the AC belt, but since we don’t use the AC ever here and the car didn’t seem to be overheating I felt it was probable smoking when the belt disintegrated and wouldn’t cause any further harm so off we went. We dropped all the employees with us off at their homes on our way through town so it ended up being just Megan and me along with Tobias and his mother in the car. As we were just about to get to the gate at FAME he looked like he went to sleep, but off course was having another seizure. I had to carry him into the ward unannounced and put him in a bed. He was in tonic extension at the time and still remained otherwise non-convulsive. We got an IV in him quickly this time and gave him some more Valium and he snapped out of it pretty quickly.

Our plan was to switch him from phenobarb to carbamazepine and so we quickly got his first dose in tonight before he seized again. What an experience and it certainly rivals Danielle’s seizing infant from last year. Very little can prepare you for such experiences and Megan did a stellar job given the very tough situation. These are the memories that will remain with us forever.

We ended the evening with a nice get together at the Lilac Cafe for all the volunteers and some local ex-pats I’ve met before. Tomorrow we’ll be on safari in Lake Manyara and then we start our mobile clinics on Monday. Another busy week here. 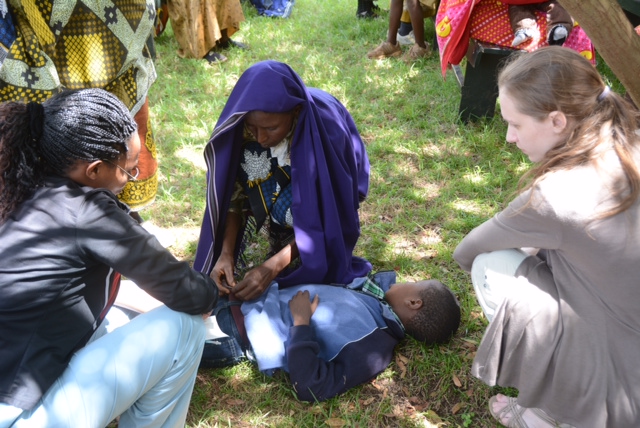